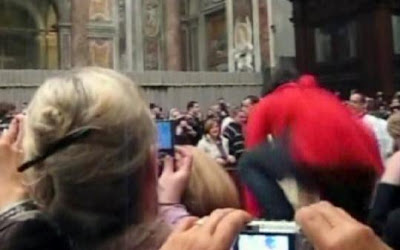 - A woman jumped the barriers in St. Peter’s Basilica and knocked down Pope Benedict XVI as he walked down the main aisle to begin Christmas Eve Mass yesterday.

The 82-year-old pope quickly got up and was unhurt, said a spokesman, the Rev. Ciro Benedettini.

Footage aired on ’s RAI state TV showed a woman dressed in a red jumper vaulting over the wooden barriers and rushing the pope before being swarmed by bodyguards.

The commotion occurred as the pope’s procession was making its way toward the main altar and shocked gasps rang out through the public that packed the basilica. The procession came to a halt and security rushed to the trouble spot.

Benedettini said the woman who pushed the pope appeared to be mentally unstable and had been arrested by police. He said she also knocked down Cardinal Roger Etchegaray, who was taken to a hospital.

“During the procession an unstable person jumped a barrier and knocked down the Holy Father,’’ Benedettini said by telephone. The pope “quickly got up and continued the procession.’’

After the incident, Benedict, flanked by bodyguards, resumed his walk to the basilica’s main altar to start the He did appear somewhat shaken and leaned heavily on aides and an armrest as he sat down in his chair.

It was the second year in a row there was a security breach at the service. At the end of last year’s Mass a woman who had jumped the barriers got close to the pope but was quickly blocked by security